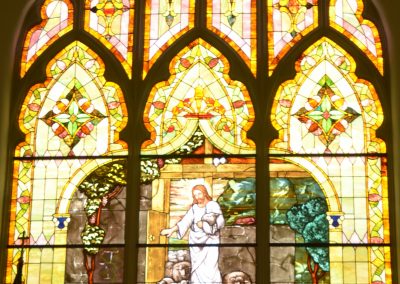 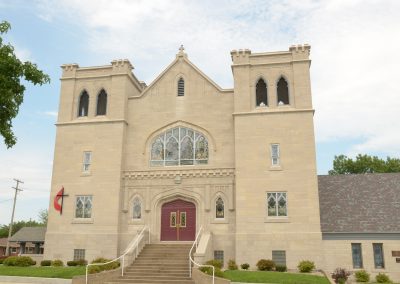 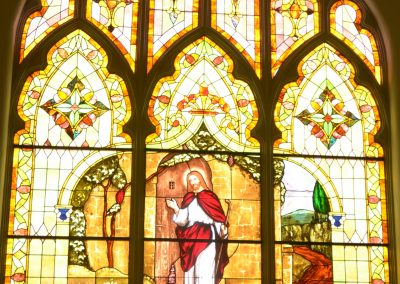 In 1828, the Cumberland Road, later the National Road, and still later Route 40, was constructed through Clark County. Marshall, a small settlement founded in 1835, became a stepping stone for travelers going west. Among the many covered wagons streaming down the newly made road were some who ended their westward migration and settled in the Marshall community. Among these was a lay preacher named Abel English and his family.

Rev. English and his wife, Mr. and Mrs. T.F. Day, Mr. and Mrs. James Martin, Mr. and Mrs. Uri Manley, Mrs. Chapman and Mrs. Hays organized the Methodist Church in Marshall in June of 1841. Meetings were held in the Andrew’s frame schoolhouse. In 1845, the members decided to build a permanent place of worship so they constructed a frame building on South Sixth Street. The 32 x 50 foot structure was finally completed in 1849 and was dedicated by presiding elder Rev. Hiram Buck. Although Abel English died before this building was finished, the English family continued to be an important part of the church. Abel English’s son, Isaac, was chairman of the 1845 Building Committee and his grandson, Will English, was on the Board of Trustees when the present church was built in 1908.

The building took four years to build. Mr. Day and the sons of Rev. English cut the poplar logs on Mr. Blundell’s farm in Wabash Township. The logs were hauled to the English saw mill on Big Creek. The cost of $800 was raised locally with a contribution from Methodists in Edgar County. That first winter the building was not enclosed, so during the cold weather a fire was kept going to keep the plaster from freezing. Joe Martin, son of James Martin, slept in the church and kept the fire going!

The first structure served for 24 years until the growing congregation needed more space. By 1872, when 300 members joined after a stirring revival, the church became too small and was unsafe structurally. In 1873, a new brick church structure was begun at the corner of Seventh and Plum Streets. The building was 40 x 80 and built at a cost of $9,000. This church building served until the spring of 1908 when it was condemned and considered unsafe. The last service was held on Easter Sunday, April 19, 1908.

The new building of Indiana stone was the third structure erected by the congregation. In 1908, work was begun on the present church and the lovely stained glass windows were added. It was dedicated on Sunday, March 7, 1909, and the sermon was preached by Bishop Robert McIntyre of Minneapolis, MN, who started his ministry here. Also dedicated was the pipe organ, a gift of John Archer, Adam R. Gard, and the Kandy Kitchen Girls, who had sold candy and cookies to help pay for the organ. The organ continues to be an inspiration to all who hear it. Music has always been an important part of worship in this congregation.

We give thanks to God and those early pioneers who paved the way for our beautiful house of worship today. Many hundreds of sincere believers have worked in First United Methodist Church to bring glory to Christ and His Kingdom.